To celebrate National Racehorse Week – an annual celebration of the racehorse – we are looking back at some of the Grand National Winners that have raced at Bangor-on-Dee Racecourse.

Wild Man From Borneo (foaled 1888) was a half-bred Thoroughbred. As a three-year-old, he was used as a hunter by his owner J.J Maher before Maher entered him in steeplechases at the beginning of April 1892. Trained by James Gatland in Sussex, Wild Man From Borneo won at Bangor-on-Dee in 1893. The following year he was entered for the Grand National, finishing third. In 1895, he again headed to the Grand National and was victorious! After his racing career he retired to his owner’s residence in West Derby, Liverpool and died in early June 1901. 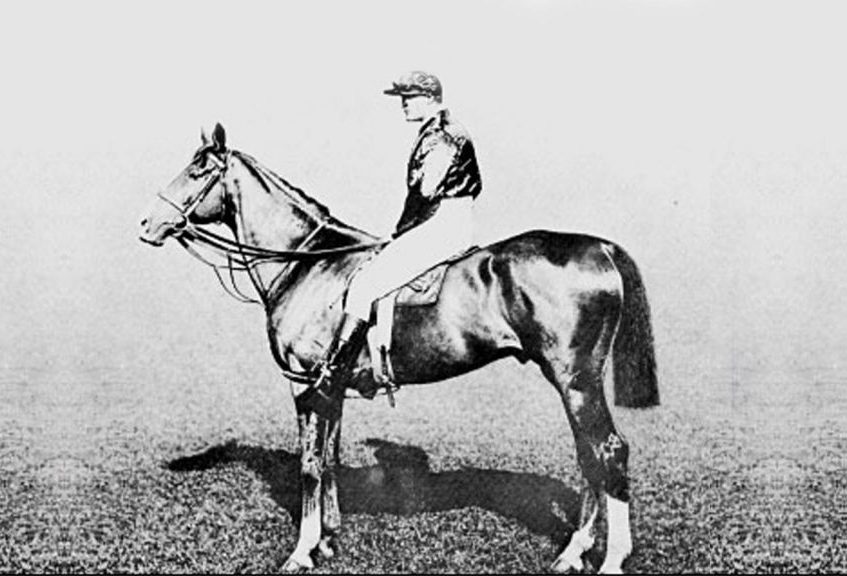 Amberleigh House (foaled 1992) started his racing career in Ireland, trained by Michael Hourigan, where he won 4 races. In 2000 he moved to England to be trained by Ginger McCain and in 2001 he raced in the Grand National for the first time but was brought down. He won his first race for his new connections during this year in the Becher Chase before winning at Bangor-on-Dee in 2002. In 2004 Amberleigh House lined up for his third Grand National after finishing third in the race the year before. He won the race by 3 lengths, ridden by Graham Lee, giving Ginger McCain his fourth victory in the race. After being pulled up in the 2006 Grand National, Amberleigh House was retired and headed to the National Stud.

Comply or Die (foaled 1999) was trained by David Pipe and won 8 out of his 20 starts. Between 2003 – 2004 he won six races including a Beginners’ Chase at Bangor-on-Dee! Comply or Die had a quiet time between 2005 and 2008 but he returned to the winners enclosure in 2008 with a win in the Eider Chase before winning the Grand National on his next start. He finished second in the Grand National the following year and participated in two additional Grand Nationals in the coming two years. In 2011 Comply or Die retired from racing and was retrained as a riding horse.

Ballabriggs (foaled 2001) is another superstar who was trained by our Champion Trainer Donald McCain and raced at Bangor-on-Dee in a Beginners’ Chase in 2008. He won 7 out of his 28 starts but his biggest victory came in the 2011 Grand National, giving Donald his first and only victory in the race. After the Grand National Ballabriggs never won a race again, although he did compete in two more Grand Nationals in 2012 and 2013. He was pulled in the 2013 Grand National and this was the last race of his career. After his retirement he returned to live on the Isle of Man with his owner, Trevor Hemmings.

Other articles
British Racing Offers Blue Light Workers a Great Day Out 15 December 2021
A Christmas Thank You from Bangor-on-Dee 7 December 2021
Important Information (27.11.21) – Racing Abandoned 27 November 2021
Sign up to our newsletter